DO NOT RELY ON LUCK BECAUSE….. 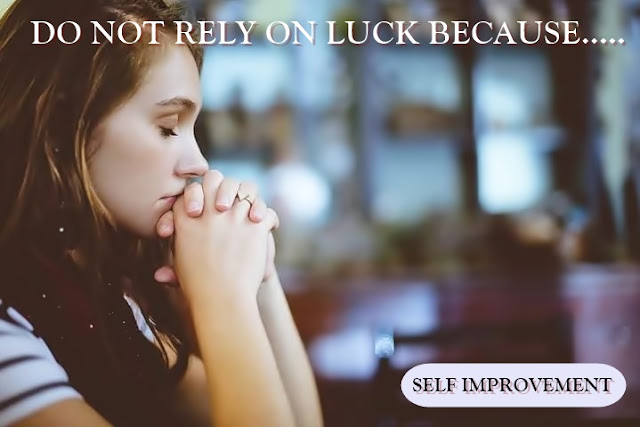 DO NOT RELY ON LUCK BECAUSE…..

You will often meet such people, who are always crying for luck and never consider themselves responsible for anything, whether they have failed in an exam or they are not getting a job, according to them all these Circumstances are responsible for things.

They don’t feel that their failure could be due to their lack of effort. Always blaming the circumstances for not accepting your shortcomings shows an immature attitude. Opportunities to achieve anything in life are rare for those with such an attitude.

One of the main characteristics of successful people is that they never shy away from accepting the reality and by understanding their shortcomings and constantly trying to overcome them.

We mold our lives into the way we want them to be. Problems are an integral part of life, it can be more in one’s life and less in one’s life. The nature of these problems also varies, but most people have a habit of exaggerating the problems. Whereas in reality the problem is not as serious as it appears from above.

The problems that come up from time to time in life can be divided into three parts. The first type of problems are those that are directly related to our behavior. Second are the problems that arise from the behavior of the people.

Most of the problems can be solved by adopting practical and responsible approach. We can overcome the problems which are under our direct control by making changes in our habits and routine. For example, ‘If someone does not get enough time to study due to the loss of much time in sleeping, then that person can complete his studies by making a habit of getting up early in the morning.’

One has to act more intelligently in solving problems with indirect control, such as “If one’s boss has a negative attitude, it is possible to make his attitude positive through good behavior and excellent work.”

It is wise to accept the problems which are not under our control and the effort should be that problems should not become a hindrance in our success. There is no use in getting upset even thinking about such problems.

We get to learn a lot from difficulties in life. Situations like these are often the ones that bring big changes in life. Our perspective of seeing the world and ourselves becomes different. Most of the people are those who wait for favorable opportunities in life and there are those who completely depend on the support of others to become something in life. But the whole time of such people is spent in waiting.

If you study the examples of people who achievers, you will find that these are the people who have taken charge of their life and who solve the problems and not the problems themselves. Sticking to his principles, he takes the right initiative at the right time. This instinct of his always keeps him ahead of others.

As human beings, we have got the ability of self-evaluation, using which we can know our shortcomings, along with this we can find out our areas of improvement and also know which talents to develop. need to.

Improving our personality, riding the future is all in our hands provided we become responsible for ourselves.

By LIFE WITH SATYA

SOME IMPORTANT THINGS AFFECT YOUR LIFE.

YOU CAN CHANGE YOUR OWN LUCK.

FAST FOOD IS HARMFUL FOR A HEALTHY BODY!